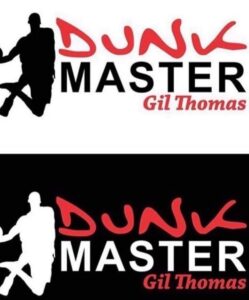 Gil Thomas grew up in Louisville, Kentucky, but trains athletes in the Los Angeles Area in Southern California and will be expanding to the Miami Metro area.  He is called the “Dunkmaster” and the name of his training program is called DunkDreams.

At the University of Louisville, he trained under the legendary strength coach Doug Seminick. Gil had an offer to work at Case Western Reserve University in 1987, where he trained the high jumpers and the basketball players to increase their vertical jump.  By the early 90’s, Gil was in Los Angeles and competed in track and field with the Los Angeles Patriot Track Team.  Gil worked with various health clubs as a personal trainer in the early 90’s.  He also worked with the Daniel Murphy High School basketball team.

After that he got certified in training with the legendary Marv Marinovich sports performance trainer.  Gil introduced the isokinetic jumper machine to Marv and collaborated with Marv to incorporate it with his training program and the SuperCat. Since the mid 90’s, Marv has produced tremendous results using this method of training.  In the mid 90’s, Gil worked with Jump USA as a consultant for the jump soles and the hyper gravity weight belt.  Gil helped develop training programs for both products.

From 2004, he worked at Los Angeles Trade Tech College as the speed and jump coach, and under his watchful eye, the athletes improved substantially in their quickness and vertical jump.  In 2005, with a feature in the Outside Magazine article and the Los Angeles Times article in 2006, Gil has exploded and has been all over the media and is now recognized as the leading vertical jump expert in the world.  Gil has been featured in the Dunkumentary Movie, teaching the average joe, standing at 5’8’’ Caucasian male, on how to slam dunk a basketball.  He also has recently been featured in the new “Making of P90X2”.  Tony Horton brought him in as the plyometrics expert.

Dunkmaster Is A Dream Maker For Some – CBS News

If you’ve ever dreamed of a rim-rocking slam dunk, then you should meet Gil Thomas. He claims he can teach just about anybody to dunk a basketball, CBS News correspondent Bill Whitaker reports.

Before you dunk, you have to jump – Los Angeles Times

The first time Sergio Siderman dunked a basketball, it was like winning the lottery and climbing Mt. Everest all rolled into one miraculous, testosterone-fueled experience.

Shop by clicking on products below.